Spent 7 days in Scotland. My husband had business in Grangemouth near Polmont, so the first half of our trip was shaped around that.

Flight came in around 5:30 am and we took a car up the M9 to Polmont. Stayed at the Macdonald Inchyra Hotel, which looks like a small castle – pretty cool. Had breakfast there and took the car up to Stirling to check out the National Wallace monument. Lucky us there was a William Wallace impersonator there giving a performance of his recounting of the battle for Stirling Bridge! Drove around Stirling a little, checking out University of Stirling and the surrounding areas. Headed back to Hotel for a nap and then ventured into Edinburgh after dark for dinner. Had burgers at a tiny pub someplace near Holyrood Park. I can’t remember the name of the pub, but experienced amazing scotch (Isle of Arran) and an interesting burger. (Horse) Word of advice – if you’re in Scotland, and you order a burger – if the menu doesn’t specifically say “Beef Burger”…well, it might not be beef.

My husband was at the plant working on these days, so I was on my own to explore the nearby village. I headed up Smiddy Brae road towards Polmont and met some adorable ponies who immediately sniffed out the apple in my daypack. (Yes, I shared) Headed over to the graveyard on Bo’Ness Road to check the headstones for family names. Theres a church ruin on the grounds, but it was fenced off so I didn’t get to peek in there. I mostly just walked around the village; bought and mailed some postcards, bought Scottish fudge and candies at a local shop, wandered around the park and neighborhood. Went to dinner one night at the hotel steakhouse, and the other night we went to Black Bull Restaurant in Polmont. Food was fantastic, especially dessert, which was Sticky Toffee Pudding. If you havent had this, do it at least once in Scotland. (I loved it so much I had it nearly every night of our trip)

We took the car up from Polmont to St. Andrews at around 3pm after my husband had finished work obligations. It’s about an hour and 20 minute trip. The ride through the country is just gorgeous, and we spotted ruins, cairns, and stunning landscapes along the way. First stop was St. Andrews Cathedral – a 12th century ruins that overlooks the St. Andrews Bay. Its conveniently close to University of St. Andrews, and we walked around campus for a bit before heading over to St. Andrews Castle. The castle is a 13th century ruins with a dungeon. Sadly during our trip it was not open for tours. We felt we had to stop by the famous Links Course. The links were closed for the season but the giftshop was open and thanks to the nice woman working there we scored some free (used) golf balls with the Links logo for our dads.  We had dinner at Playfairs on North Street (Amazing) before heading back to Polmont.

We took the train from Polmont Station to Stirling. Walked around the area for a bit and stopped in at The Burgh Coffeehouse for breakfast. Checked out Mar’s Wark monument and Holy Rude Church – a 15th century church with surviving stained glass windows. We spent a considerable amount of the morning wandering around the cemetery behind the church. My family’s ancestry is rooted in Stirling and so I hoped to find some familiar names there – it was extremely foggy that morning and it was cool and creepy to walk around the cemetery. After that, we walked on up to Stirling Castle and did the full tour. We saw a few castles during the trip but Stirling ended up being my favorite. We went back to hotel for a nap around 4 and then ventured out to Queensferry to meet a friend. Took some time to walk through a small park off Stoneycroft Rd. Ended up right near a little beach area and went to dinner nearby at 3 Bridges Restaurant – the food was fantastic and it had amazing views of the Firth of Forth and Forth Bridge. Our friend drove us back to the hotel in Polmont.

Left Polmont via train for Edinburgh. Stayed at The Hilton at Edinburgh airport. We took a cab into Edinburgh on day 6 which was pricey, so for day 7 we walked from the hotel to a bus stop and took an iconic double-decker bus into the city. We toured Edinburgh Castle which was very cool but I will say this – If you’re a history nut like me and only have time for one castle during your trip, Stirling Castle is better. We explored the Royal Mile and saw some pretty cool buildings and monuments. Had lunch from a tiny carry-out fish & chips place one day. Toured a place called Tartan Weaving Mill. You can see the old fashioned wooden weaves as well as the new ones, and find your family’s tartan colors, and of course you can buy a tartan if you’ve got the cash (they’re a little pricey – about £300).

Our second full day we spent most of wandering around the city and shopping. Went to a couple ‘high street’ stores, went to Princes Mall & York Place. Had dinner at Deacon Brodie’s Tavern one night and went to a fancier place on Royal Mile our last night in the city – the name of the place escapes me, it was good but nothing special.

Some things we learned:

Getting around:We had a rental car for the 1st 4 days, it was useful for getting to the farther places like St. Andrews, but overall unnecessary. We returned it and used public transit or cabs for the other 3 days and had no trouble getting around. Trains and buses are easy to take, stations are well marked.

Touring Castles:We bought the Scotland Explorer passes and they were well worth the £30. They get you into over 70 castles, ruins and monuments throughout the country for one flat rate, and at Edinburgh and Stirling Castle they allow you to skip the huge lines. Great way to save money if you plan to see at least 2 sites – highly recommended!

Food: Try the traditional Scottish breakfast! It sounds a little weird but is SO good, almost every restaurant offers it. I think theres a stereotype that Scottish food is boring and bland, we do not agree with this. We found the food to be overall amazing. I’ll also say again that you MUST try the sticky-toffee pudding, it is hands down the best thing I’ve ever tasted.

Gratuities:UK is not a tipping culture, but some restaurants add an automatic gratuity in the bill, so check that first. Tips in restaurants and for cabs are usually about 10% and its not an expected custom like it is in the US – it’s received with genuine gratitude.

Firth of Forth, United Kingdom 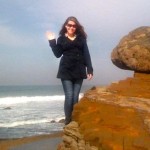