We arrived in town in the evening making our first stop our hotel.  It was listed as one of the main things to do that I had found through my various research about the city and boy, we were not let down.  This hotel is beautiful both inside and outside!  The rooms were very spacious and something we were both pleased to see in our room… a minibar (I don’t know why every hotel in the States doesn’t hop on this bandwagon)!  Even if you do not stay at the hotel, it is worth the look see.  There are some nice shops and swanky bars inside to check out. We ate dinner in the hotel and crashed for the night, planning to spend the next day exploring.

When planning our road trip, we had only thought of Quebec City as an overnight spot before hitting the road to our next stop, looking back, we both agreed that this was our favorite location on our tour and wished that we would have had more time to explore.  Reading reviews, Vieux Quebec, was said to be just like Paris but with it’s own unique charm and that’s exactly what it is.  We awoke early the next morning to see Vieux Quebec before the tourists flocked to it.  Our hotel was perched high on a hill so there were two options of getting down to the old town, stairs or le funiculaire, we chose the lazy route.  Le funiculaire is a railway that takes you up or down the hill for the price of $2 a person, not to mention, you get a gorgeous view of the town below or up on your way (photo-op!).  The streets are all cobbles with all the one-of-a-kind businesses colorfully assembled side-by-side.  We were a little early for the shops so we decided to grab breakfast at Le Cochon Dingue.  Delicious Parisian breakfast and they even gave us a complimentary fruit juice blend for a morning pick me up.  After breakfast we thought we would go exploring the shops but we realized something about the French side of Canada that differs from the rest of it’s provinces… the French like to sleep in, with their business days starting at 10 A.M. So after strolling around for a bit, we found the Musée de la Civilization, which opened at 9:30, something to do.  DON’T GO!  For two tickets, the cost was $32 and the exhibits were rather bizarre.  Maybe they have better exhibits that roll through from time to time but we were very bored, which is unusual for us when visiting a museum. We we left, finally the shops were open, such a nice place to stroll and shop, being as there isn’t a Target or Starbucks in sight…very refreshing.  Soon it was lunch time and during our morning stroll, I was intrigued by a French bistro’s curbside appeal in the morning and was pleased to learn that the specialized in rabbit!  Apparently it was the spot because when we arrived for lunch, there was a twenty minute wait to eat outside, we chose to dine inside being as it was a little muggy.  Close quarters inside but everyone was super friendly and happy to be enjoying the food and ambiance of the establishment.  I had the sauteéd rabbit, while Ian splurged for the rabbit poutine…I should have gotten the poutine, he got much more meat and let’s be honest, who doesn’t love greasy french fries covered in cheese?  We also got a paté, fromaggio and meat tray that was perfect for an appetizer, they even make their own raspberry soda, so refreshing!  After lunch, we headed back up le funiculaire to pack up and head out to our next stop.  In the town square up the hill, there were magic acts going on!  I wish we would have stayed here longer so that we could have seen Montmorency Falls and the Hotel de Glace, which is the city’s Ice Hotel.  We made the executive decision that we will return in the winter to spend more time in this city and try to make it one night in Hotel de Glace! 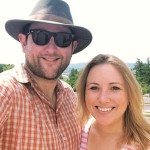