We drove to Key Largo from Miami took us about 2 hours to get there since traffic was a little crazy for Labor Day weekend.  We arrived at the house we where renting around 10pm and got settled in.

Started our jet ski trip by going to Molasses Reef and Pickles reef.  We went there with snorkels and lobster gear.  Saw plenty of coral reef, sea turtles, fish, etc but no luck with lobster.  The next stop was a sandbar area where a bunch of boats just park and had a few beers before heading to lunch.  We parked the jet skis at the dock and went to the Tiki Bar and had lunch. After lunch we drove to a tower called Alligator Reef where we snorkeled as well.  At this reef we saw lots of similar things but also got to see a few Barracudas and about a 2 foot nurse shark. Later that night we went fishing at a few bridges in Key Largo.

The next day we did more of tourist day and drove down to Key West which took about 2 hours not including the stops.  The first stop was at a famous attraction called Robbie’s.  Robbie’s is know for having large Tarpon swimming around and people can feed them by hand on the docks.  Next we went to a famous beach in the area called Bahia Honda.  We snorkeled here as well and hung out for a little before continuing the trip down to Key West.  Once we got to Key West we had lunch at El Meson de Pepe a Cuban restaurant in Mallory Square area. While at Mallory Square we walked around did some shopping and watched the sunset.  After that we stopped at the southern most point buoy and took pictures and then we drove back to Key Largo.

The last day we rode jet skis again.  We drove over to meet with friends and the John Pennekamp mangroves.  We had more planned for this day but a friends jet ski was causing issues so they had to put it up.  After that got settled we went pack to Pickles reef and snorkeled for a bit.  After this we drove back washed up jet skis and started trip back to Miami.  We stopped and got dinner before the long drive at Gilbert’s Resort then drove back home. 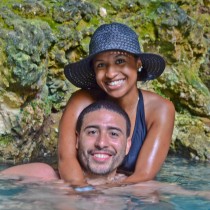