After arriving in the morning, we settled into our apartment then visited Monserrate Palace. The grounds were gorgeous and had several waterfalls and gardens. After we explored the grounds, we entered the palace. The palace is beautifully preserved and offered some great photos.

Next, we left for Cabo Da Roca, the westernmost extent of mainland Europe. It was busy, but the views were spectacular. We made the short walk to Praia da Ursa, which is a beautiful secluded beach that requires a treacherous hike. I wanted to go down to the beach (30 minute hike) but opted not to because I was worried for our kids safety. I snapped some photos of the beach from above and left for our apartment.

In the morning, we visited Quinta da Regaleira. It’s a mansion that features a chapel and an extensive and park. It looks like something out of a fairy tale. This was one of the highlights of Sintra for me. We spent close to 4 hours there before making our way to Sintra National Palace.

Of all the attractions in Sintra, the Sintra National Palace was my least favorite. The building is very well preserved and it’s a UNESCO heritage site, but parking was a nightmare and the area was extremely busy. One of my favorite things about this palace was the immaculate gardens overlooking the town.

We drove to Pena National Palace. Before entering, we decided to visit the inexpensive rooftop cafe where we enjoyed lunch and a few adult beverages. This palace also looked like it was taken from a fairy tale. It featured bright colors with several arches and turrets. The views from here are breathtaking and it’s easy to spend a lot of time just taking it all in. After spending a few hours here, we walked to the nearby Castle of the Moors.

We entered the castle right before closing, so it wasn’t very crowded. After a short climb to the top, we took photos of the Pena National Palace and the rest of the town.

Sintra is one of the most beautiful towns I’ve ever visited. It has very narrow streets and it’s very hilly, but it’s definitely worth a visit.

We started the day at Prai Da Rainha, which isn’t in Lisbon, but it’s between Sintra (where we’d spent 2 days prior) and Lisbon. This beach was the highlight of the trip for me. We spent a few hours at this beautiful beach before heading to Lisbon.

After checking into our apartment, we went to the Church of São Roque. Entrance was free and the interior is elaborately decorated. We grabbed a bit to eat and took a few pictures of the Carmo Convent. We got a later start to the day, so we opted not to enter the Convent.

We continued to Municipal Square, which vaguely reminded me of the area near the Pantheon in Rome. After resting our legs, we continued to Commerce Square. This area was very lively and featured a panoramic view of beautiful buildings and the water. There were street performers and we spent a lot of time enjoying the views.

On our way home, we found a playground that had a nearby “time out”. These were little kiosks all over the city that sold snacks and beer/wine. We let the kids play at the neighboring playground while enjoying the live music.

In the morning, we took the trams to Belém. The tram dropped us off right in front of Jeronimos Monastery. Entrance to the monastery was free and the interior and exterior were gorgeous. We left for the Monument to the Discoveries and found a cart selling ginjinha, local cherry liqueur. We tried it and made our way to the Monument. It’s a lot larger than it looks in pictures. Next up was Belém Tower. The tower was beautiful, but we decided not to enter and instead let the kids play at the nearby park. After a long and confusing bus ride back to our apartment, we relaxed for a bit before heading to Barrio Alto to sample a little bit of the nighlife before our early morning flight. 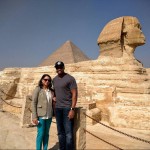