Cruise to Italy, Greece, and Croatia

This trip was a 12-night cruise on Princess Cruises to Italy, Greece, and Croatia (beginning in Rome and ending in Venice). The cruise was a great way to see a lot of cities in a short period of time, without having to worry about transportation. We started the cruise with 3 extra days in Rome, and ended with an extra day in Venice.

Arrived in Rome. Took a hop-on/hop-off bus tour to get they lay of the land. Our hotel was Hotel Smeraldo, which, while the rooms were tiny, was in a great locations and had nice restaurants right across the street (alley).

Our guided tour of the Vatican was phenomenal. It was led by a nun who was knowledgeable and funny. Easy to spend an entire day here!

We boarded our cruise and set sail!

Each day we did a group excursion from the cruise. The first day was Pisa and Florence. After a quick stop in Pisa to see the Leaning Tower we took a rather long bus ride to Florence. Once in Florence we didn’t have time to go to the Uffizi, so we went to the nearby courtyard that had replicas of some of the famous statues. We then went to the Duomo and the Ponte Vecchio. There was also a nice international festival going on in Sante Croce square, so we enjoyed some German doughnuts!

Our excursion on this day was to Pompeii, Sorrento, and Capri. Pompeii, while definitely ‘touristy’ was fascinating. We only had a couple of hours in Sorrento for lunch and some shopping, and then we took a boat ride to Capri, where we saw the Garden of Augustus and the famous rock formation.

This day of the cruise was my favorite – we went to Santorini! We visited a local winery for some wine and snacks, and then we were off to the town of Oia to see the beautiful white houses. I could have spent hours there. To get back to the boat you have an option of walking, taking a mule, or taking a cable car. We opted for the cable car.

The day we were supposed to spend in Athens got cut short because of demonstrations happening in the city. We saw the Olympic Stadium and went to the top of the Acropolis.

Our day in Mykonos started with a tour of the Island of Delos. Not sure if I would do this part of the excursion again. Not much to see. Fascinating history, but mostly ruins where you have to picture what used to be there. We had a traditional Greek lunch in Mykonos, and then saw Little Venice and the famous Windmills. Could have used more time in Mykonos instead of Delos.

Our day in Olympia started at the Archaeological Museum. Not very memorable. The Olympic Ruins, however, were definitely worth visiting, as was the Olympic Museum. I enjoyed our stop in town to try some baklava.

Corfu is a small Greek island. The Achilleon Palace was gorgeous but in obvious disrepair because of the state of the Greek government. Visiting a monastery on Corfu was a great experience!

Our next stop was Croatia! We docked in the city of Split. First we went to the Town of Trogir and saw the cathedral. When we got back to Split it was raining a lot, so we did a bus tour of the city but nothing else.

Our final port of call was Venice. First we took an excursion of Murano and Burano to see the colorful houses and glass-blowing factories. These islands are a must-see if in Venice! Next we visited St. Mark’s Square, went through Doge’s Palace, and walked to the Rialto Bridge.

On our final day in Venice we wandered the streets and took a water taxi ride through the canals. A wonderful last day of the trip 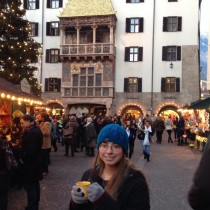