7 Days in May
Europe

We booked a Groupon through Great Value Vacations. It included flights, hotel, and rental car.

Landed in Rome and drove to Sorrento, about 3 hours. As much as people talk about the winding roads in Italy, this drive was normal/freeways. We were staying at the Hotel Gardenia for 4 nights. The hotel desk was very helpful, recommended restaurants and tours. We weren’t able to get anything for the following day, but we booked tours for Days 3 and 4. The hotel is a 15-20 minute walk into the main downtown area, and there are plenty of shops and restaurants. We went to Re Food for dinner, my favorite meal of the trip and great service.

We purchased Circumvesuviana train tickets and a day tour ticket for Pompeii at the Sorrento train station. Pompeii is about 30 minutes away. “Skip the line” tours mean that you don’t have to stand in line to purchase tickets, but the tour operator still does – it’s not life-changing. Our tour guide was good, about 2 hours for the tour. I would go as early as possible, and I probably wouldn’t pay for a tour. Save money and do it on your own. It was very hot, the staff said we probably wouldn’t be up for Mount Vesuvius, and they were right.

Took the train back, had dinner at Ristorante S Antonino and We love Puro for dessert – amazing gelato.

Best day of the trip. For about 120 Euros we did a boat ride around Sorrento, across the water to Capri, around the island, and spent some time on Capri. They picked us up from the hotel, provided lunch and wine, and we had a great time. We got to swim in the sea and really circle the island on the boat. We almost didn’t get to see the Blue Grotto because it was so crowded and the smaller boats that actually take you into it were all full. The tour boats only get so much time to sit and wait, but we came back at the end of the day and got to see it. It was pretty awesome, but not an absolute must-see.

The American Kararoke Club in Sorrento was a fun stop in the evening, near the central area.

For the other tour we booked our first night, a van picked us up at the hotel and took us along the coast. Very narrow streets on the cliffs – glad we weren’t driving. Stopped in each of the cities and made several stops for pictures as well. Ravello was the most different because of the green mountains and less-touristy feel. Amalfi was more touristy but very scenic. Positano was better from a distance because of the colorful houses – can’t appreciate it as much when you’re actually there. The tour took all day and was well worth it, even though we had our own car and could have driven there. We got to fully enjoy it and take in all the sights along the coast.

Took our time and drove back to Rome, where we stayed at Hotel Midas. About 15 minutes away from Vatican City and has a shuttle ($5 pp, only at specific times) that goes to Vatican City and then you can take the subway from there to get anywhere in the city. Uber was very expensive, so the shuttle was worth it. We did use Uber once, however, this evening to see the Trevi Fountain all lit up. Beautiful, and while it won’t save you from the sight of people everywhere, was still worth going at night. Grabbed dinner nearby and headed back to the hotel.

Took the shuttle to the Vatican City and bought a tour from one of the vendors on the street. We purchased the “skip the line” pass for the Sistine Chapel and Vatican Museums. I don’t know if it’s actually any faster, but you don’t have to stand in line yourself. I was most excited to see the Sistine Chapel, but I found St. Peter’s Basilica more interesting.

We took the metro (crowded but has AC) to the Spanish Steps and did some shoppingin the area. Then we went to the Colosseum, admired from the outside. Beware of the people who have kids at home in Africa who almost force you to pay for their bracelets – some pretty aggressive people around there.

Believe the warnings that say to get to the airport very early. We had to go through security and then customs, which took a long time. We flew with Al Italia and they seemed to have pretty strict carry on rules, so we had to check our bags unexpectedly. They provided meals and wine, which was different from flying in the US for sure. Found the service to be better than US carriers as well.

We loved the Italian people in general – all the people we came across on the trip were great, friendly (one a little too friendly).

Eating out usually takes a while – they do not rush you and you have to ask for the bill. Ask for “il conto.”

Driving in Italy between cities was fun, but I think leaving the car at the hotel and walking, getting a private driver, or taking public transportation from there is the way to go. Scooters ignore all traffic laws, so watch out for them. 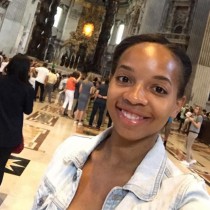