Savannah is a gorgeous place for a weekend getaway in early Spring. We went the first weekend in March and it wasn’t too crowded, and the weather was so pleasant.

On Friday night we landed at the Savannah/Hilton Head airport around 7:30 and rented a car for the drive to the city (we also needed it to drive to the Hilton Head airport on Sunday when we left, or else we would have taken a cab). We stayed at the East Bay Inn – we stayed here about 8 years ago and it was definitely worth a repeat stay. Perfect location. After checking in and parking our car at a garage around the corner, we ate dinner at the Boar’s Head Tavern, which was on the Riverfront/River Street. Great food and convenient location to our hotel (right across the street).

Our hotel included a free breakfast, but we also visited Café M (one of Savannah’s highest rated restaurants on Trip Advisor) for a coffee and a chocolate croissant. Worth it. We then meandered around the Riverwalk, went in the Savannah Candy Kitchen, saw the Waving Girl Statue and the Olympic torch. It’s a nice area to walk around on the water – lots of shops and bars and restaurants. Next we started wandering through the squares – you could spend a whole day just walking around the squares and people-watching on the benches. Each square has its own personality, and spring is the perfect time to see the azaleas. We walked up to Cathedral of St. John the Baptist and spent some time inside – we hadn’t done this on our first trip to Savannah. It was beautiful and I’d categorize it as a must-see. We had lunch at a restaurant called Chive, which lived up to its Trip Advisor reputation. Their baked snapper risotto was amazing. We got there right when they opened at noon and they were packed by 12:30. We had a quick stop at Leopold’s ice cream after for dessert. After lunch we walked around the City Market a bit and visited a few stores. Next we did the tour of the Juliette Gordon Low (found of the Girl Scouts) birthplace. Not sure I would recommend it unless you are or were a dedicated Girl Scout. After the house tour, we went on a Photography Tour with the company Capturing Savannah. It was just my husband and I on the tour so our guide customized the tour for what we wanted to see and helped me take great pictures. We covered a lot of ground in the city and I got some great shots. After the tour we stopped at Jen’s and Friends martini bar, another Trip Advisor suggestion, and it also lived up to the reputation. More martini options than you could possibly imagine. For dinner we went to the Olde Pink House, as we had done 8 years ago. It’s popular, and the food is okay, but the atmosphere is a bit lacking. Not sure I would return on a third visit to the city.

On our last day in Savannah we visited Forsyth Park in the morning (of course a must-do) and then had lunch in the City Market at Belford’s – nice place for some fish and chips and a great place to sit outside. We finished up the day in Savannah with a carriage tour – cliché, but still fun. Then we got our car and drove out to Bonaventure Cemetery. It was as cool as the pictures look, and they have a nice map that tells you where to find all the famous plots/statues. We spent under an hour here because it was quite bug-y. We had to drive up to Hilton Head after leaving. where we met co-workers to finish the trip in South Carolina.
Year traveled: 2017 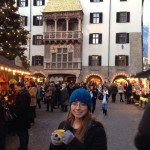