Day 1 Arrival in Seattle and Concert

I should predicate this story that I was visiting my cousin in the Fremont area of Seattle, so I had a bit of a “locals” tour of the town.

At Pikes we did some browsing, lunch at the Athenian, contributed the famous gum wall, a beer at the Alibi room, a quick espresso at the first Starbucks official coffee shop.  On the city walk we hung out at the park by Pikes then we laid out in the grass to take in some sun and just be for about a half hour (that’s what the native do).  Then we drove over to the Needle (we didn’t go up) and had a brisk walk around the surrounding area taking in the artistic buildings, museums, the International Fountain and the hospital from Grey’s Anatomy.  I’m an avid boardgamer, so we hit up Blue Highway games and Card Kingdom (both highly recommended), with a quick drink at Cafe Mox (a gamer’s cafe).

After a long start to the day, it was time for  a quick nap and shower.  Since my cousin lives in Seattle, we had a place to relax.  After recharging the batteries, we drove to a friends in the Capitol Hill area for a few drinks and wonderful view of the city from top of the apartment rooftop (see cover image).  Then with a quick Uber ride we headed over to the historic Paramount Theater for concert.  After the concert and another quick Uber ride we ate some food at Local burger joint called Dick, which is a late night staple.  We closed the night at bar called the Sea Monster for some Soul Reggae Jam music and approaching 24 hours of travel and site seeing it was time for rest.

We had a full day just taking in the town.  We ate breakfast at local bar called Hatties.  Then we hit a few records stores – Sonic Boom and Bop street, plus a stop under the famous Troll Bridge.  After that we headed up to Redmond and checkout Jimi Hendrix grave, then we drove home past Boeing to check out the size of the Amazing complex.  Next, we went to Brandon and Bruce Lee’s grave in the city.  We ended the night with a few friend at a great dog-friendly bar called Norms place – the dogs really made the atmosphere, a pet lovers “must” stop.

We took an hour and half drive into the Alpines to hike up to Rachel Lake.  It was a 12 mile hike with some slight elevation and took about 10 hours, with an hour stop at the top to bask in the sun and take in the scenery.  That night after we headed back, we had an amazing dinner at Charlie’s Bar and Grill on Broadway. 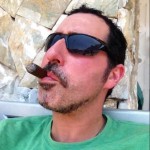